In 2014, Paul McWhorter, a 17-year veteran of Sandia National Labs and founder of a Silicon Valley nanotechnology company, returned to his hometown of Eldorado, Texas, to start a new career as a high school teacher.

When not teaching math and engineering classes at Eldorado High School, Paul devotes time to lecturing on subjects ranging from how to become a successful engineer, programming with Arduino/Raspberry Pis, and learning 3D CAD. Paul uploads his lecture videos on his website and YouTube channel.

Much to everyone’s surprise, Paul also established the high school’s first space program. He oversees a four-year high school engineering program where younger students are encouraged to join the space program in their junior and senior years. With his guidance, students design, build, and program instrumentation packages sent into the upper atmosphere via high-altitude balloons. He documents the missions in a dedicated YouTube channel. 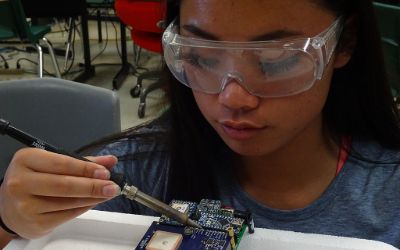 The instrumentation packages, called Eagles, are sent to the edge of space and transmit back temperature, pressure, and GPS data, as well as live video. A 9-axis inertial measurement system also sends data on the Eagle’s orientation. In all, twenty different data channels are telemetered back to ‘Mission Control’ in the classroom. Some of the additional data channels include down range velocity, vertical ascent rate, latitude, longitude, elevation, system health, signal strength, downrange distance, heading, and trajectory.

A unique accomplishment of these student engineers is their development of an ability to stream live video from the edge of space back to the classroom. The students use standard 2.4 GHz Wi-Fi radios and reconfigure them to operate on the 2.39Ghz HAM microwave radio band. Each member of the program has a HAM radio license, so they can legally operate on this microwave band.

Since the instrument packages can reach altitudes over 115,000 feet and can travel 100 miles down range, maintaining a live video link is a formidable challenge. Technical and regulatory requirements limit the space-bound microwave radio to 1 watt transmit power. In order to communicate over these large distances at such a low power level, a high-gain antenna is required on the ground-based tracking system.

The challenge of using a high-gain antenna on the ground is that it must be pointed with precision at the space-bound instrument package. A pointing error of just a few degrees can lead to loss of signal. According to Mission Commander Jack Griffin: “The challenge becomes even more formidable since the instrument package can reach speeds of over 150mph, as the package ascends through the jet stream. Imagine trying to hit a target with one-degree precision that’s over 100 miles away, traveling at over 150mph.”

Griffin, who is a 17-year-old high school senior, continues: “We’re definitely solving real-world problems in this program. It’s more like working for a Silicon Valley start-up than being in a high school class.”

The ground-based tracking antenna is mounted on a Pelco Pan/Tilt platform. The position of this platform is controlled by relays in a closed-loop feedback system run on a Raspberry Pi microcontroller. The control system works as follows: A GPS on the space-bound instrument package measures the package’s latitude, longitude, and altitude. This data is then transmitted back to the ground- based tracking system. The system then takes these data points and applies the complex Haversine computation to calculate the necessary heading and elevation for the antenna to be precisely pointed to the instrument package. A feedback loop then moves the Pelco such that the antenna is precisely pointed at the target coordinates. In order to maintain the microwave video link, this feedback loop must constantly and quickly adjust the antenna position.

High school junior and Ground Tracking Specialist Benjamin McGee claims: “This is definitely a challenge and mission success depends on keeping the ground-based antenna pointed precisely at the package, no matter where or how fast it goes.”

The team is busy working on preparations for the launch of Eagle IX. Mission Commander Jack Griffin is confident that this will be the best launch ever. Griffin says: “We have our flight designed and expect to get our highest-quality images and most precise data to date, which we will live-stream on our YouTube channel so anyone on Earth can see it.”

The key element for this entire system to work is to have a reliable way to get the GPS data back from the space-bound instrument package to the ground-based tracking system.

Mission Specialist Christine Lindsey says: “Mission success depends on reliable transmission of GPS coordinates from the instrument package back to the ground, We’ve chosen the RockBLOCK modem and Iridium satellite network because it provides rock-solid connectivity. Initially we sent the GPS data coordinates over our microwave link, but if we lost connection, there was no way to regain it. With the RockBLOCK, we always know where the package is and how to point to it. With this system, we can maintain our microwave data link.”

This high-frequency radio beam has poor propagation, meaning it’s important to aim the antenna precisely at the Eagle. To achieve this, GPS data is transmitted via RockBLOCK to Ground Control’s servers. It’s then pushed via HTTP post to Paul’s own server which adjusts the high-gain antenna position accordingly, thus maintaining the video link.