Epsom College and the Microtransat Challenge

Epsom College are competing in The Microtransat challenge and are trying to build a robot boat that can sail from England to America autonomously.

It has been attempted approximately 25 times by Universities, Businesses and Individuals; however, it has never been completed.

RockBLOCK is being used to send back telemetry data from anywhere in the Atlantic Ocean. Every hour it provides Latitude, Longitude, Battery Voltages, Temperatures inside the electronics bays and sends a ‘Mayday’ if water is detected in the hull. Each update is forwarded to a PHP script that easily stores the information in a SQL database, updates Twitter, and places a marker on a rolling map on their website. 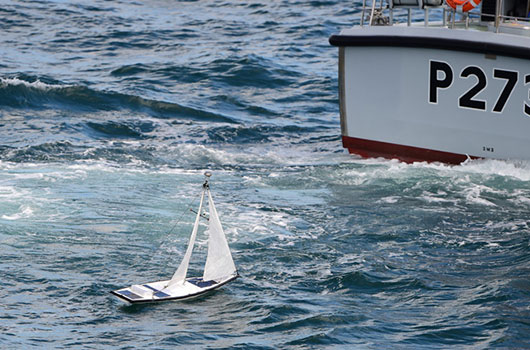 The Microtransat Challenge was launched in 2005 to stimulate the development of fully autonomous model sailing boats capable of crossing the Atlantic in an east-west or west-east direction. To date, none of the 12 Microtransat attempts has been successful. In July the Epsom College team will hopefully be the first to succeed where many have failed and you will be able to follow the attempt live.

The boat is a GRP hull based on a J-Class racer. We own the mould and so can try again if this boat fails. It is 1.8M long weighs 10-15kg depending on its ballast. The ship uses a student programmed navigation system that uses GPS and a magnetic digital compass. The boat updates its location using the Iridium Satellite Network and a Rock7 RockBLOCK board. In the first week it will update every hour, then drop back to every six hours.

Our server runs scripts that save key data in a database, uploads to Twitter and Emails the competition organisers. This website allows you to follow our attempt via markers on Google Maps.

Accompanied by Head of Chemistry, Jamie Styles, and Head of Physics, Chris Telfer, 6th formers Tim Lazarus, Tom Egan, Charlie Steward, Jamie Gleave and Aiden Findlay left Torquay Marina at 10.00am aboard the Royal Navy vessels HMS Exploit and HMS Pursuer and were ferried to the selected launch point 30km off the south-west coast of England.En route to the launch, the College team witnessed a real life rescue as a Navy destroyer, HMS Dragon, and a coastguard helicopter provided assistance to a medical emergency aboard a pleasure yacht.

With a flat sea and the temperature hitting 26˚C, The Microtransat Challenge officially started on 5th July 2016 10.53am. Nerves were jangling as the boat headed the wrong way but it quickly pointed its bow in the right direction towards the Atlantic.

Initially, the tracking system appeared not to be working as it placed the boat somewhere near Paris but a small tweak to some of the land-based software quickly fixed the error.

As a final test before being left to the journey, the boat had to endure the swell of HMS Dragon as the destroyer made multiple passes to allow its crew to watch the launch.

After seeing the boat off, the team made the return trip to Torquay during which they were delighted to be flanked by a pod of breaching dolphins.

The College team is aiming to be the first to successfully complete The Microtransat Challenge, which was launched in 2005 to stimulate the development of fully autonomous model sailing boats capable of crossing the Atlantic in an east-west or west-east direction.

Bringing together students and staff from the Mathematics, Geography, Chemistry, Physics and Computing Departments, the team have been working on the design of their boat since September 2015 as part of a student-led STEM (Science, Technology, Engineering and Mathematics) project.

Register for our monthly email newsletter to get the latest stories in satellite, M2M and IoT. No spam, no third parties, just great content written by our team of experts.