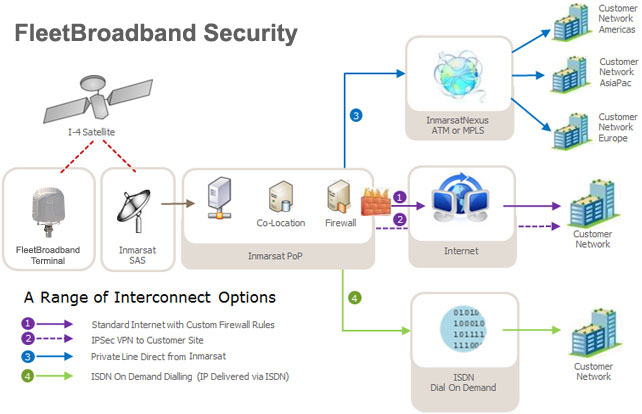 Included with all Ground Control FleetBroadband Subscriptions. $0 setup and $0 per month.

Comprehensive whitelists and blacklists can be created for individual FleetBroadband accounts and there’s no additional cost for setting up this service with Ground Control.

Our FleetBroadband VPN functions via a secure interconnection between your central network hub and the Inmarsat NOC (network operation center) closest to your location. There are two benefits to this scenario. First, since the VPN terminates at the NOC, speeds won’t drop over the satellite network, which is a common problem with VPN over satellite.

And second, there’s no need to configure individual remote equipment with VPN equipment or software since the VPN terminates at the NOC. All FleetBroadband traffic is routed at the NOC through the VPN portal to your HQ.

Please call for pricing.
Ground Control can establish a leased line or MPLS connection from the NOC to your HQ. In the latter case, Ground Control can save you the hassle of arranging international connections. Any solution can be discussed. Applications are integrated by a FleetBroadband IT engineering team, so that if you’re developing a worldwide network, we’ll offer you the best and most cost-effective solution.

Please call for pricing.
Much like a leased line, Ground Control can establish the same connection via a standard ISDN 64Kbps line, which can save on monthly data line expense to the NOC. While slower than a leased line, ISDN speeds are consistent because the data line is not shared.

To find out which connectivity solution best fits your organization and existing network, Ground Control has a number of specialized ICT experts available as consultants. These specialists are highly knowledgeable in satellite, IT, and IP technologies, and will explain the best options available to you.