‘Big data’ has become part of the maritime lexicon in recent years. It’s hailed as the answer to achieving operational efficiencies, and is part of the reason that the demand for bandwidth at sea continues to grow.

The use of big data somewhat reflects how internet usage patterns at sea follow that of businesses on land. As satellite capacity grows, service providers, IT companies, and equipment manufacturer work out ways to use it to gain efficiencies and ultimately save costs for ship owners and operators. Many of these applications are based on the concept of machine-to-machine communication, also known as M2M. Sensors in onboard equipment can talk directly with applications on land via satcom – delivering automated reports and statistics, for instance, which can be leveraged to understand vessel performance better.

Though M2M applications can run over the VSAT equipment found on ships, the use of M2M communication isn’t limited to large commercial vessels. New systems have been developed that focus on understanding the challenges of communicating at sea for smaller vessels, especially in terms of cost, security, and the lack of space onboard, which may rule out the installation of a large satcom antenna. So with smaller, lower-cost equipment and lower-bandwidth services, the world of M2M is opening up for vessels of all types and size. ‘Small data’, if you like. 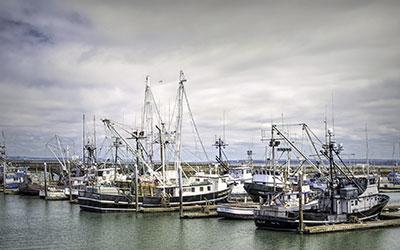 Ground Control is at the forefront of this scaling-down of satcoms for M2M applications, with its RockFLEET and RockBLOCK products.

RockBLOCK is a plug-and-play two-way global communications system designed to work with any computing platform with a serial or USB port, including Arduino™, Raspberry PI™,  Intel Edison, Windows, Mac, and Linux computers. It’s a simple, low-cost, and reliable way to integrate two-way communications into any M2M system. It can send messages of 340 bytes and receive messages of 270 bytes using Iridium short burst data (SBD), which offers global, pole-to-pole coverage. It can transmit commands and receive data from almost any equipment on board so the potential applications are huge.

The tiny (7.6cm x 5.1cm x 1.9cm) device uses either an onboard patch or external antenna using an optional SMA connector and a standard 0.1″ pitch connector for easy interfacing of equipment. Both of these aspects give greater flexibility in terms of onboard configuration of an M2M network – a vital aspect considering that ship and boat design varies massively.

Also available is the RockBLOCK+, designed for rugged applications, encapsulated in a waterproof IP68 housing, and including a 3m lead. It takes 9-30v DC power (instead of 5v on the standard RockBLOCK) and RS-232 signals (instead of UART). RockBLOCK+ is ideally suited for commercial organisations operating in hazardous or inclement environments. Essentially, it’s ideal for installing outside on your vessel.

RockBLOCK originally became popular in the so-called ‘makers’ market, where engineers, students, and inventors develop creative projects using IT and electronics components. Everything from oceanology to homemade space planes have used the RockBLOCK system to send and receive commands and the simplicity of the system transfers well to the maritime sector.

As an easy to implement and operate system suitable for all levels of technical expertise,  RockBLOCK provides a diverse user-base with the ability to cost-effectively extend the ‘Internet of Things’ to maritime arena. Thousands of RockBLOCK units have been sold to date. Some notable projects include two-way communication duties on high-altitude balloon launches, a rocket-powered aircraft project, tracking the position of marine buoys for the Poseidon Project, and a marine oil spill response system designed and built by students.

Potential applications on ships and boats include security, automation, and engine monitoring. But unlike the headline, million-dollar complex VSAT networks that are part of the big data and smart shipping concepts, M2M communication using RockBLOCK is achieved on far more modest budgets. This means privately owned workboats, fishing boats, and yachts can benefit from M2M communication, for basically any application they can think of, while larger fleets can save money and supplement their VSAT systems with an M2M-only solution.

The low initial outlay and airtime costs are also driving maritime technology companies to develop commercial products using RockBLOCK as a foundation. Although the bandwidth available over Iridium SBD is relatively low compared to VSAT, the potential for developing commercial products that can make a real difference is high.

One innovative application is the use of Ground Control’s M2M communication technology on hyperbaric lifeboats, which are designed to safely transfer divers currently in saturation and unable to decompress for days – should there be cause to abandon their diving ship. Decompression from saturation would cause certain death so modern saturation diving vessels are fitted with at least one hyperbaric lifeboat that can carry up to 18 divers to safety.

When on board the diving vessel, any occupants of the saturation diving chambers will be monitored closely to ensure their health and safety. This poses a challenge should the occupants have to be moved to a hyperbaric lifeboat in an emergency, as the conditions inside the lifeboat chamber have to be maintained to close tolerances of temperature, gas mixture and pressure. The resources available to maintain these conditions within the lifeboat chamber are strictly limited and to maintain the conditions stable for any amount of time is difficult. This makes the monitoring of available resources and conditions within the chamber critical.

A UK-based instrumentation and data logging company for the commercial diving industry is developing a system to make data from hyperbaric lifeboats available over satcom. Though hyperbaric lifeboats have been around for 30 years, this is the first serious attempt to connect them to a monitoring network by satcom. A key challenge until now has been the size and power requirements of satcom antennas. There’s also been a cost consideration, with the majority of satcom services locking users into annual contracts. Considering not a single hyperbaric lifeboat has ever been launched in a real emergency, funding a fleet of lifeboats with an open satcom connection could become costly if using VSAT or other L-band services.

So to enable satcom for data transmission from a hyperbaric lifeboat, the development team has chosen RockFLEET. The system offers the same functionality as RockBLOCK while addressing the size, power, and cost challenges of installation on hyperbaric lifeboats. Operating on the same Iridium SBD service as RockBLOCK, RockFLEET has primarily been designed as an innovative ship tracker. However, Rock Seven (now trading as Ground Control) launched an M2M module in December 2014, opening the RockFLEET system up for a wealth of new applications.

On the cost side, there’s no annual contract, only pay-as-you-go use. The system provides pole-to-pole global position data and each M2M data transmission costs as little as £0.03.

The RockFLEET unit is only 13cm diameter and 4cm high and can easily be integrated with onboard equipment using a variety of serial protocols, whilst RockFLEET’s open API ensures data in any format can easily be delivered to users’ own applications. It’s also the only system of its kind to feature an onboard battery, so if it loses power from the vessel, it can keep on working for approximately two weeks (depending on the application and environment).

These attributes are the drivers behind this project to enhance communication from hyperbaric lifeboats, and should one ever need to be launched for real, the occupants will stand a better chance of being recovered safely when their rescuers have critical data available.

While RockBLOCK provides a singular approach to M2M data, RockFLEET consolidates two key aspects of maritime communication systems – vessel tracking and M2M data. Many shipping companies are keen on the concept of vessel tracking; it’s vital to know where all ships in a fleet are at any one time. But with today’s IT-focused maritime world, it’s now not just possible to receive data from vessels but almost essential to do so in order to operate as efficiently as possible.

With the M2M data module, RockFLEET can provide both position data and any other kind of data required – an advanced feature set, but one that doesn’t cost the earth and can help operations on even the smallest vessel improve through the use of low-cost data communication.