Ground Control’s two North American teleports service two different high-performance satellites that operate independent of each other. With the Dual Matrix Service, a single mobile satellite dish may connect with either of the satellites at any time, no matter the plan they subscribe to.

Satellites in geostationary orbit are 22,236 miles above Earth; they’re moving at the same speed as the planet, and so appear to be stationary to us. As they’re in much higher orbit, they can ‘see’ much more of the earth, so fewer satellites are needed to cover a large territory. 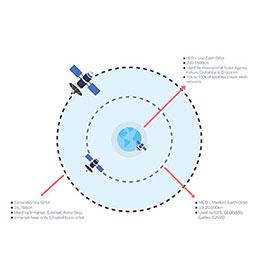