Home ▸ GuidesPosts ▸ Satellite orbit heights, and how they impact satellite communication
Back to media

Satellite orbit heights, and how they impact satellite communication

In this guide, we’ll explore the difference between low earth orbit (LEO), medium earth orbit (MEO) and geostationary satellites, and the benefits of each in terms of providing satellite connectivity. 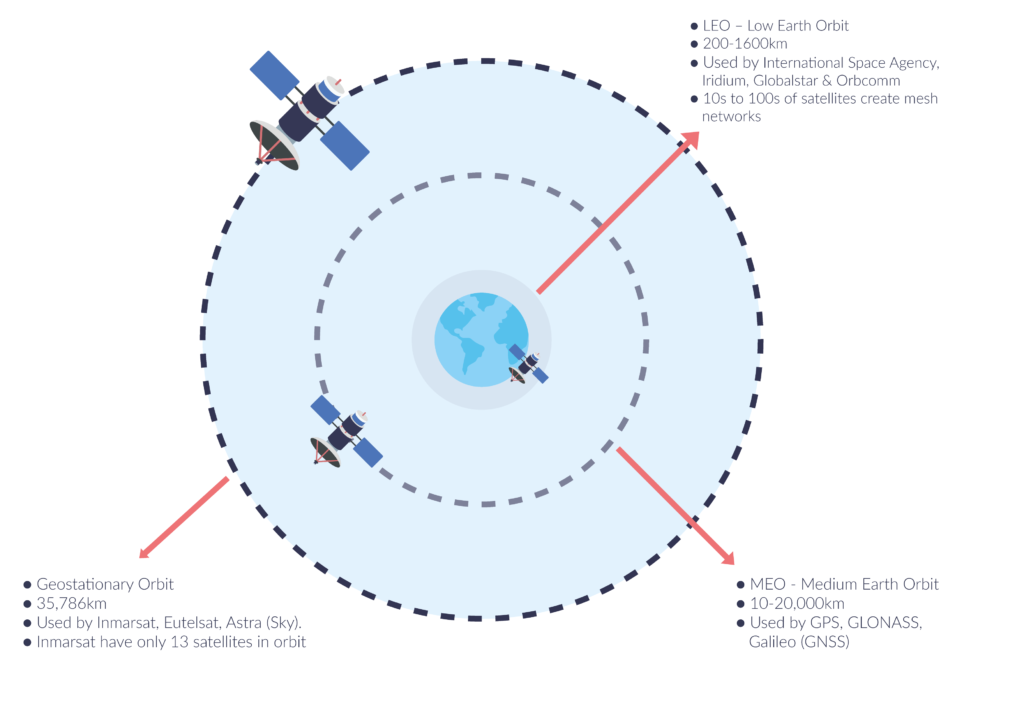 This diagram shows the relative distance from Earth of the three satellite orbits, with low earth orbit closest to the earth at 200 – 1,600km (373 – 932 miles), and geostationary orbit the furthest away, at 35,786 km (22,236 miles). Medium earth orbit (MEO) satellites are more rare; only 10% of satellites are orbiting at this height, and they are used almost exclusively for GPS and related services, rather than communications.

As the diagram above shows, a great benefit conferred by this network is that you don’t have to point your antenna in a particular direction to connect with the satellites. As they’re constantly moving around, there will always be a satellite that picks up the signal, and passes it on so it reaches the ground station. This is particularly useful if you are trying to transmit data from a heavily wooded or hilly area, as you only need to be able to see the sky, rather than needing to find a specific look angle.

Ground stations (sometimes known as earth stations) are where all data from the LEO satellite constellation is sent, and from where it’s transmitted to your base of operations, using the internet.

Another benefit of LEO satellite constellations is that because they’re close to the earth, the latency – the time lapse between sending and receiving the data – is the lowest of the three orbit types, at less than one second. This is particularly important for voice calls, where a slower connection can compromise the clarity of the call.

Satellite communication companies using LEO include Iridium, Globalstar and Orbcomm; when SpaceX’s Starlink satellites are fully launched, they too will utilise this orbit.

Latency is a little slower for geostationary satellites because the data has further to travel; it’s usually less than two seconds for the data to be sent, and redirected to the ground station, which is more than adequate for M2M / IoT applications, and to supply broadband internet. Once at the ground station, the means by which the data makes its way to your business – using the internet – is broadly the same as satellites in low earth orbit.

An option for companies who want zero reliance on public infrastructure is to choose a private satellite network. Here, instead of your data going to a shared ground station, and being sent on to you via secure internet channels, you have your own ground station at your business premises.

This solution is, as you might expect, more expensive than using the standard ground station > backhaul via internet setup, but it provides customers with complete peace of mind both on data security and reliability of service. This service is provided by TSAT – the Ground Control product leveraging this service is called the SCADASat.

If you’re unsure about the best satellite service for your requirements, get in touch; we work with multiple airtime providers (including Inmarsat and Iridium), and we’d be happy to give you objective advice based on 20 years’ experience in providing satellite communications.