Ground Control’s BGAN service plans are global and may connect with any of the BGAN satellites at any time with any of the BGAN plans we offer… no certification or training required. The circular lines on the map show the “Look Angle” of the nearest Inmarsat BGAN satellite to help you locate a satellite. For example, to connect from California, a BGAN terminal will need to point south-south-east and tilt the BGAN terminal face up 45° degrees from a level horizon, while a BGAN terminal in Nigeria will aim east-south-east and 60° degrees up. Some BGANs come with a small compass built into the terminal to help point a terminal. 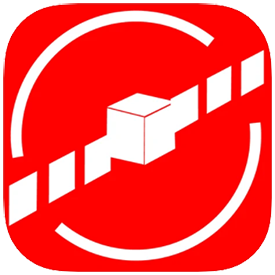 Easily locate any of the BGAN satellites using your iphone or iPad with this free BGAN Pointer App from Livewire Digital. Handy to have for remote locations or scouting for fixed locations. This App only requires a GPS fix and does not need a cellular or Internet connection to operate globally. It's free, so download it now and test it out.

The Inmarsat I-4 MEAS (Middle East and Asia) is the 4th (and newest) Inmarsat satellite that may be used by all BGAN terminals for connectivity. The MEAS satellite’s primary objective is to provide more capacity to users in these regions. It was operational on the BGAN network on July 12, 2016. To connect with this satellite, please make sure you have the most recent BGAN firmware installed on your terminal.

The 4th I-4 MEAS satellite is outlined in red below.

Inmarsat has 32 Satellite Access Stations (SAS) at strategic locations through the world that are all privately interconnected. The 6 primary SAS stations are located in New York, Hawaii, Hong Kong, Italy and Amsterdam. The Primary Network Operations Center (NOC) is located in London UK and performs the coordination of all network activities, monitoring and troubleshooting.

Since a BGAN terminal uses the L-band for reception and transmission (the L-band has a very long wavelength), it is able penetrate through clouds and other atmospheric condition far better than large satellite dishes.

Can BGAN Be Used On A Ship or Boat?

Yes. We recommend the MCD-4800 that has its own power so the terminal is easily transported from vessel to vessel and can be used on land. For fixed terminals, we recommend the Explorer 510 that has a very wide view angle compared with other fixed BGAN terminals, and works when a vessel is traveling in a fairly straight line.

What are the differences between the Wide, Regional and Narrow Beams?

Beams are what the Inmarsat satellites transmit onto Earth and there are three beams they use… Wide beams for pointing signal strength, Regional beams for Voice and SMS, and Narrow beams for Internet.

Wide beam (not registered): This is the beam that you use for pointing. Minimum signal should be 50 or higher as seen on your Web Interface of the BGAN terminal.

Regional beam (registered): From the Web Interface of any BGAN terminal clicking on the “Register” button allows the terminal to make and receive phone calls and SMS messages. It is not for actively passing data (Internet) traffic… For that option to occur, click on “Start Data Session” from the Web Interface. Typical signal when in a Regional Beam is high 50s (usually 57-59).

Narrow beam (registered): These are the data/Internet beams (shown in a graphic below) and are used when clicking on “Start Data Session” from the Web Interface of any BGAN terminal. This establishes an active PDP context and IP data is allowed to pass from a connected device to the Internet. An ideal signal should be 65 or higher once establishing a connection with a BGAN Narrow Beam. Please note that a data connection may fall back to the regional beam after about 2.4 minutes of data inactivity.

If your narrow beam signal is bouncing between 60 and 63, it could be a pointing issue or the antenna/mount may be loose and moving or not pointed correctly. Please to take time to find the highest signal strength possible with your terminal for best results..

Interesting Facts On BGAN I-4 Satellites and Coverage Area

Today there are three BGAN Satellites that give contiguous worldwide coverage. Each I-4 can generate 19 wide beams and more than 200 narrow spot beams. These can quickly be reconfigured and focused anywhere on Earth to provide extra capacity where needed. Information on Inmarsat Wide Beams and Narrow “Spot” Beams.

Some of the spacecraft’s impressive features include:

Prior to January 7, 2009, there were only two BGAN satellites that serviced the Americas and Europe/Africa regions. With the successful activation of the third satellite on January 7th (which was activated over the Americas) the two existing BGAN satellites were repositioned to better global locations for full world-wide coverage. The first phase of repositioning completed on February 6th with new coverage region for Europe/Africa. The second and final phase happened on February 24, 2009 for the Asia Pacific regions.

If you know your location on the map below, you can approximate the compass heading, as well as how many degrees up from the horizon one of the Inmarsat satellites will be. 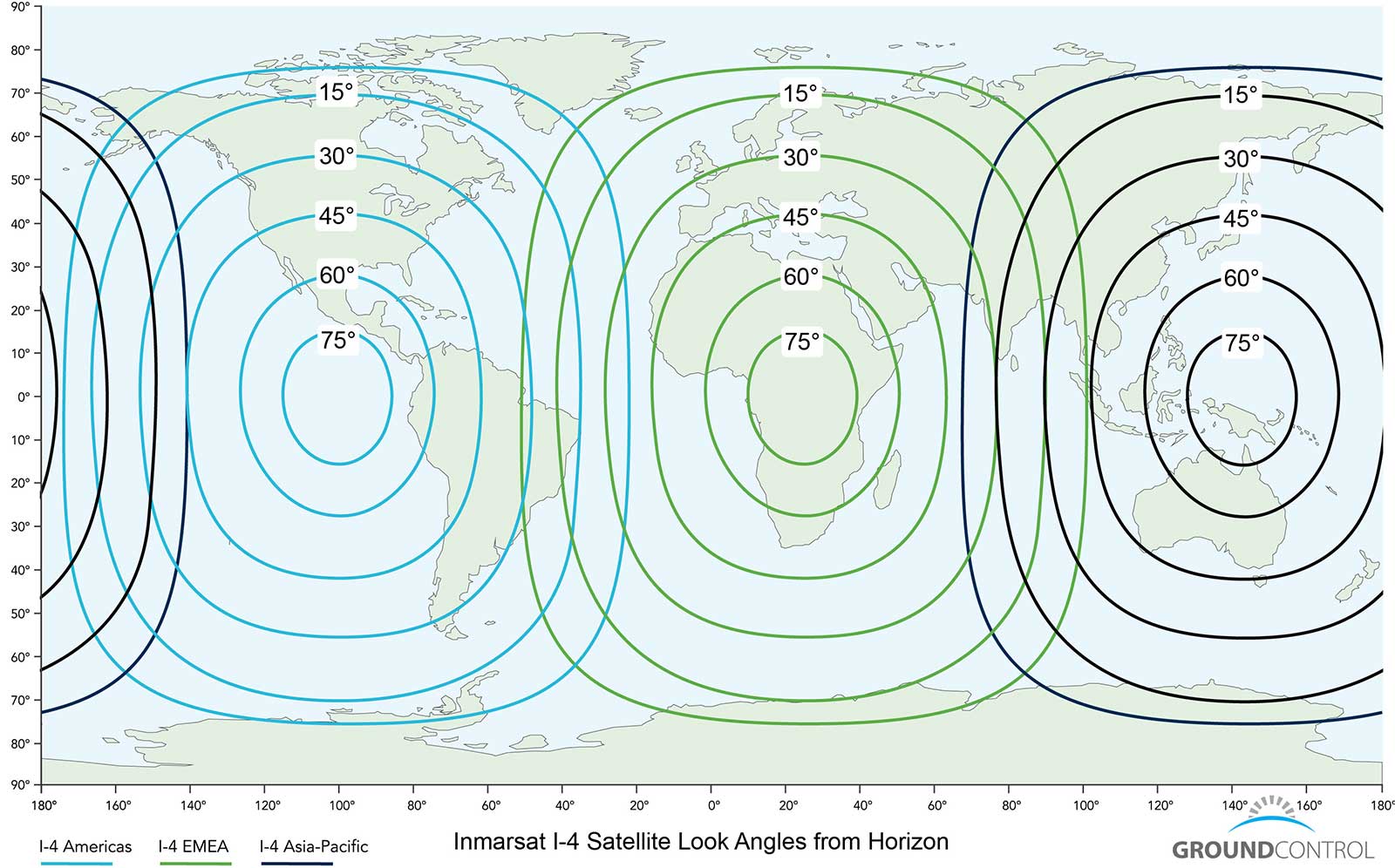 There are 228 Spot beams for each of the I-4 Inmarsat satellites.