When living and working in remote locations, there are limited options when it comes to internet connectivity and telecommunications. For individuals working for example, at sea, or on an oil rig, this operational challenge is likely something they are very familiar with. Thanks to advancements in technology however, there are two popular options for IP communications over satellite – VSAT and Inmarsat’s BGAN.

At Ground Control we enable individuals, businesses and organizations to operate efficiently and safely, no matter where they are based in the world. So for those not in the know, or new to facilitating operation connectivity in remote areas, we have broadly outlined how VSAT and BGAN work, and their relative strengths and weaknesses in the delivery of broadband internet.

VSAT – “Very Small Aperture Terminal” – is a satellite ground station that allows businesses and individuals to transmit and receive data, voice and video via satellites. The dish antenna will always be smaller than 3.8 meters in this classification and in most cases, around 1.0 meter. VSAT systems are comprised of four main elements: How does VSAT work?

The VSAT antenna dish is positioned in direct sight of the satellite. The antenna receives data from the satellite, which the receiver (LNB) collects. The receiver then converts the data into a lower frequency signal which can be transmitted over coax cable and interpreted by the modem and thus user device, for example, a laptop. Conversely, the transmitter (BUC) transforms data received via the user device and modem, back into a higher frequency (usually Ku and Ka Band), to ensure this can reach the satellite – 22,300 miles above the earth’s equator.

The antenna consists of small terminals which can be installed across distributed sites, and connected to a central hub via the satellite. With VSAT, data is either relayed from these terminals (also termed small remote ground stations) to other terminals (in mesh topology), or master ground station “hubs” (in star topology). In the case of the latter, the “hub” controls the entire operation of the network. For one end user to communicate with another, each transmission must first go to the hub station via the satellite link, the hub station then retransmits this via the satellite to the other end user’s VSAT. This tends to be implemented in situations where there is a Head office – Branch office type hierarchy, and is able to accommodate a large number of terminals.

In contrast, with a mesh topology, all terminals can communicate with each other via the satellite without going through a central hub. This set up normally supports 5 – 30 terminals.

BGAN – “Broadband Global Area Network” – is a satellite network which consists of four satellites owned by Inmarsat. The network can deliver high-speed voice and data connectivity via BGAN terminals, which are often both compact (size of a laptop) and portable.

Inmarsat licenses several manufacturers to develop BGAN terminals that communicate with the orbiting Inmarsat satellites. Ground Control offers all available BGAN terminals, including one we manufacture called the MCD-4800, aka ‘The Football’.

How do BGAN terminals work?

The BGAN terminal is placed within a clear view of the sky, from there the terminal obtains its position using GPS. The terminal then needs a line-of-sight to one of the satellites within the network. This means there cannot be any tree, wall or building between the terminal and satellite. Usually units are set up outside, but they can be inside, if the satellite can be seen through a window. To achieve alignment, some terminals are turned slowly by hand, until they indicate that they have found the satellite – manual pointing. Or in the case of the MCD-4800, the unit automatically aligns with the satellite – auto-pointing. Finally, often just with the touch of a button, the terminal auto-negotiates with the satellite and connects.

Computers and other devices are then connected to the BGAN terminal, either through a simple ethernet cable, or via Wi-Fi.

Broadly speaking, the differences between VSAT and BGAN can be grouped into the following categories: Coverage, Reliability, Cost and Security.

The Inmarsat BGAN satellite constellation provides a seamless network that operates with near global coverage. VSAT coverage is similar, but in most cases it is not seamless as users will often require separate contracts on different satellites and teleports.

Additionally, if coverage is required while physically moving, it’s important to note the distinction between mobile and on-the-move connectivity. Some VSATs are considered mobile, insofar as they can be packed into, or attached on top of a vehicle to be set up in different locations. But VSATs with phased arrays or electronically steered antennas such as the Kymeta u8, can deliver on-the-move connectivity. Likewise, select BGAN terminals like the MCD-4800, support connectivity on-the-move via auto-tracking.

Furthermore, location, or more specifically likely weather in said location, can also be a very important coverage factor. VSAT satellite technology operates in a number of different frequencies, including C band (4 and 6 GHz), Ku band (12 and 14 GHz) and Ka band (20 and 31 GHz). Although Ka band enables users to send more information per second, this higher frequency is also the most impacted by weather conditions, for example heavy cloud, rain and snow. This phenomenon known as “rain fade”, also affects Ku band, albeit to a lesser extent. Conversely, the L band (1 to 2.7 GHz), used by BGAN terminals, can deliver a stable connection, even in adverse weather conditions.

There are multiple satellites with coverage of most areas of the world, creating built-in options to reroute traffic for continual service even when there is a satellite failure. This makes both VSAT and BGAN very reliable, with availability rates of 99.5% and above. However, reliability during use is arguably dependent on two important factors:

Initial cost – set up
BGAN terminals range from $1,295, to $13,495 for units with auto-pointing – simply, a device capable of aligning itself with an appropriate satellite. For BGAN terminals that provide on-the-move connectivity via auto-tracking, units are priced upwards of $13,495. As installation for BGAN terminals is relatively simple, often users are fine without assistance from a technician.

Similarly, VSAT costs vary significantly, depending on multiple factors including the bandwidth the equipment uses and size of hardware. Entry level setups start around $3,000 but can be $10,000+ for large scale operations. For these, organizations must also factor in costs for mounting solutions and installation. In contrast to satellite TV, in which antenna dishes only need to receive data, VSAT antenna dishes need to be placed within one tenth of a degree to ensure data can also be sent to the satellite in the sky. So a trained technician is required for installation.

VSAT systems with auto-pointing are priced from $20,000, but due to the automation, these units often don’t require trained manpower for installation.
Operating costs – Service plans
VSAT airtime plans usually have a fixed monthly rate, which is based on the bandwidth speed – ranging from $200 to $20,000/month. Some VSAT bandwidth plans enable users to pick their desired upload and download speeds, while more Enterprise Level VSAT networks have a monthly metered service – enabling network operators to build a higher quality network.

BGAN’s Standard IP service is charged per Megabyte (MB) of data received and/or transferred, which ranges from $3 to $7 per MB. Generally speaking, when moving large amounts of data, VSAT is a more cost-effective solution long term. However, new variations in BGAN pricing plans have allowed high data users to reduce the price per MB to near VSAT prices, at high volumes. We recommend speaking to a satellite professional who will be able to take your application needs and projected daily, monthly and annual usage into account, to help you identify the most cost-effective package.

In addition to service plans, depending on the operation location(s), users may be required to obtain appropriate licensing. Africa, Latin America and Asia, all have stricter regulations regarding licensing – so authorisation may be required. Licensing varies from country to country for both BGAN and VSAT, however BGAN licensing is usually less expensive than VSAT. Organizations should analyze their case with an expert, so they know what to expect in the different countries they plan to operate within.

VSAT and BGAN networks are standards based and support IP (Internet Protocol) and its variants through a protocol called IPoS (Internet Protocol over Satellite – TIA 1008). Both also support encryption of all data transmitted between two sites or multiple sites, which make the creation of Virtual Private Networks (VPN) possible. This capability enables users to achieve a far greater level of security.

In summary, there are clear advantages to both BGAN and VSAT technology. VSAT is best for permanent installations that need ample bandwidth, for example, delivering broadband to multiple users, at the same time, in off-grid areas. BGAN is better suited to single users or small teams with sporadic usage patterns, and mobile use, for example, vehicles on land and at sea. However, this article is for the purposes of broad understanding only. There are a lot of factors at play, and we advise anyone setting up a remote operation which requires connectivity, to get in touch with our experienced team.

Want to deliver reliable connectivity to your off-grid operations?

There are a lot of components to consider when deciding on the best solution for remote, reliable, connectivity. With over 20 years experience, our expert team is on hand to help guide you through this process. And as a preferred Iridium and Inmarsat partner we can also help you maintain connectivity, while reducing your daily, annual and ongoing costs. Email us at sales@groundcontrol.com or phone us on +44 (0) 1452 751940 (UK and RoW) or +1.805.783.4600 (USA). 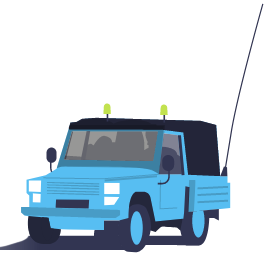